While at Cal Tech, Gary Demos was made aware of the work of John Whitney, Sr. who was teaching classes there, experimenting with early CG images. Whitney’s work, and that of the University of Utah, prompted Demos in 1972 to go to work for Ivan Sutherland at Evans and Sutherland (see Chapter 13.) E&S used DEC PDP-11 computers along with custom E&S hardware, including the E&S Picture System and a variation of the frame buffer which was used at Utah. At E&S, Demos began discussions about filmmaking with Ivan Sutherland, and together with Glen Fleck and  John Whitney Jr. they started a company in LA called the Picture/Design Group. P/DG worked on several film projects, including a test for the Carl Sagan TV show“Cosmos”, and some joint projects with Information International, Inc. Founded in 1962, Triple-I was in the business of creating digital scanners and other image processing equipment.

The Triple-I graphics effort was founded as the Motion Pictures Product Group by Whitney and Demos (with Art Durinski, Tom McMahon, and Karol Brandt soon joining) in 1974. Early software was written by Jim Blinn, Frank Crow, Craig Reynolds, and Larry Malone. Blinn developed software (Tranew) for Triple-I, which ran on a modified DEC PDP-10, called the Foonly F1, which came out of the Stanford Research group and was originally used for OCR. They did some early film tests and broadcast graphics work for the European market. Motion picture work included TRON, Futureworld, Westworld, and Looker. They also produced Adam Powers, the Juggler as a demo of their capabilities.

They marketed their services as “Digital Scene Simulation”, and did several spots for Mercedes, ABC and KCET, as well as tests for scenes in Close Encounters of the Third Kind and an X-wing test for Star Wars.

Triple-I hired Richard Taylor, an art director at Robert Abel, to handle the creative director efforts there. He brought a sense of film production to Triple-I, which in his words were lacking. He directed “Adam Powers” and was assigned as the effects supervisor for TRON (Triple-I produced the MCP, the Solar Sailor, and Sark’s Carrier). Other projects included tests for Disney’s The Black Hole and the Empire Strikes Back, a stereo production called Magic Journeys, and many groundbreaking television advertising and promotion sequences.

Although they defined much of the early commercial perception of CGI, concerns regarding the computing power necessary to continue in the business prompted Whitney and Demos to leave to establish Digital Productions in 1981. They departed before TRON was completed, so much of the Triple-I contract was taken up by MAGI. Richard Taylor continued to handle the effects supervision, and was hired by MAGI when the film wrapped.

For the FutureWorld production, the PFR (programmable film reader) had color film scanning and recording capabilities added. From this basic system, Triple-I developed what would be known as their DFP system (for digital film printer) beginning in 1978. A frame buffer was added, and the film recording and scanning became operational in 1981 after delays in the optical system development.

Gary Demos and John Whitney, Jr. went on to form Digital Productions, and later Whitney/Demos, and Demos then founded DemoGraFX (which was acquired by Dolby Laboratories in 2003), where he worked with digital TV, HDTV standards, digital compositing, and other high technology graphics related projects.

Whitney founded USAnimation, which later became Virtual Magic Animation, in 1992. Demos and Whitney received the Academy of Motion Picture Arts and Sciences’ Scientific and Engineering Award for the Photo Realistic Simulation Of Motion Picture Photography By Means of Computer Generated Images in 1984 for work on the movies “The Last Starfighter” and on “2010” using the Cray XMP. Demos also received an Academy Scientific and Engineering Award in 1995 for Pioneering Work In Digital Film Scanning”, and an Academy Technical Achievement Award in 1996 for Pioneering Work In Digital Film Compositing Systems.

My personal history in the early explorations of computer graphics, by Gary Demos. Visual Computer, Vol 21, 2005.

Marvin Minsky and John McCarthy established the Artificial Intelligence Laboratory at MIT as part of Project MAC in the early 1960s. McCarthy’s work included the development of the programming language LISP. In 1965 Minsky hired Russell Noftsker to head the lab. He and a colleague Richard Greenblatt worked together to commercialize Greenblatt’s idea of a LISP workstation, and in 1980 he founded Symbolics, Inc. Their first LISP machine, the Symbolics LM-2 was released in 1981, followed soon after by the Symbolics 3600 series, which proved to be an excellent workstation for computer graphics production.

Shortly after the introduction of the LM-2 workstation, the Triple-I graphics division ceased to operate, and several of the key employees joined Symbolics as the Symbolics Graphics Division.

Included in this group were Tom McMahon, Larry Malone, Craig Reynolds Larry Stein, Matt Elson, Bob Coyne, and others. Out of the southern California shop, the group developed software and hardware built around the LISP architecture. The major contribution to the CGI world was a line of bit-mapped graphics color video interfaces and the very powerful S-Graphics software suite (S-Paint, S-Geometry, S-Dynamics, S-Render) for Symbolics Genera operating system.

The S-Graphics software was used in the production of several notable films, including Stanley and Stella in: Breaking the Ice (1987), The Little Death (1989), Ductile Flow, presented at SIGGRAPH 90, Jetsons: The Movie (1990), Virtually Yours (1991), and 3D animation of the Orca whale for Free Willy (1993).

Symbolics workstations were the first computers capable of processing HDTV quality video, which enjoyed a popular following in Japan. As a result of the capabilities of the computers, Symbolics entered an agreement with a Japanese trading company, Nichimen. The Graphics Division was later sold to Nichimen in the early 1990s, and the S-Graphics software was ported to Franz Allegro Common Lisp on SGI and PC computers running Windows NT. It was later integrated into the Mirai software platform by Izware LLC, and has been used in movies, such as New Line Cinema’s Lord of the Rings, video games, and military simulations. 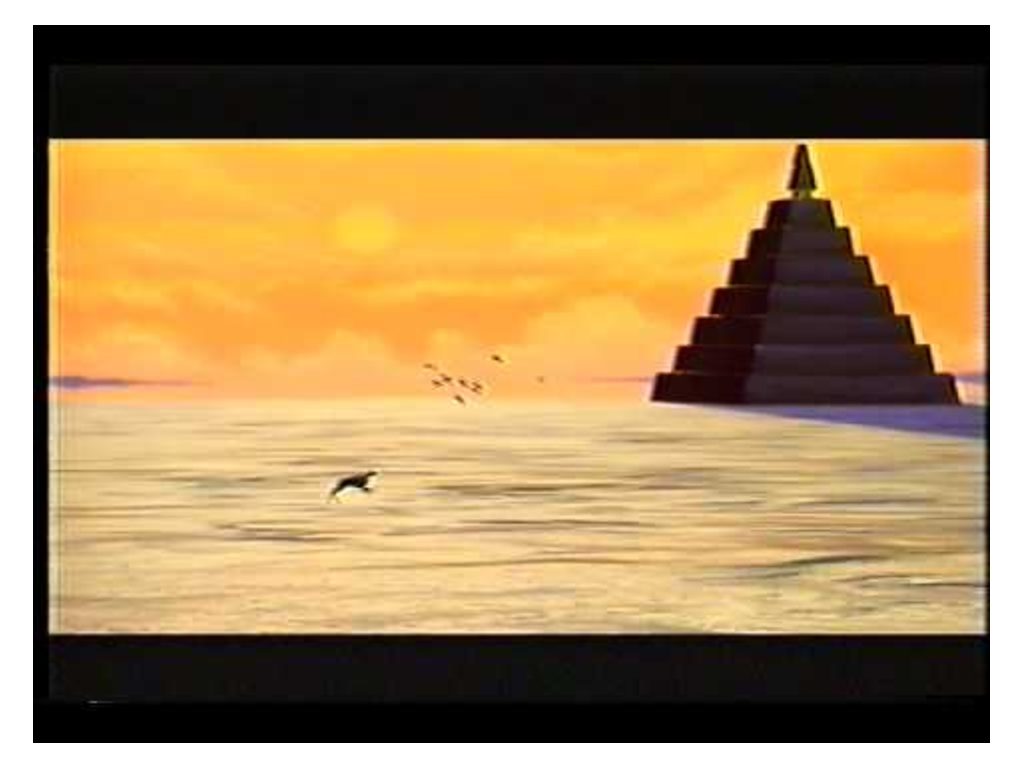 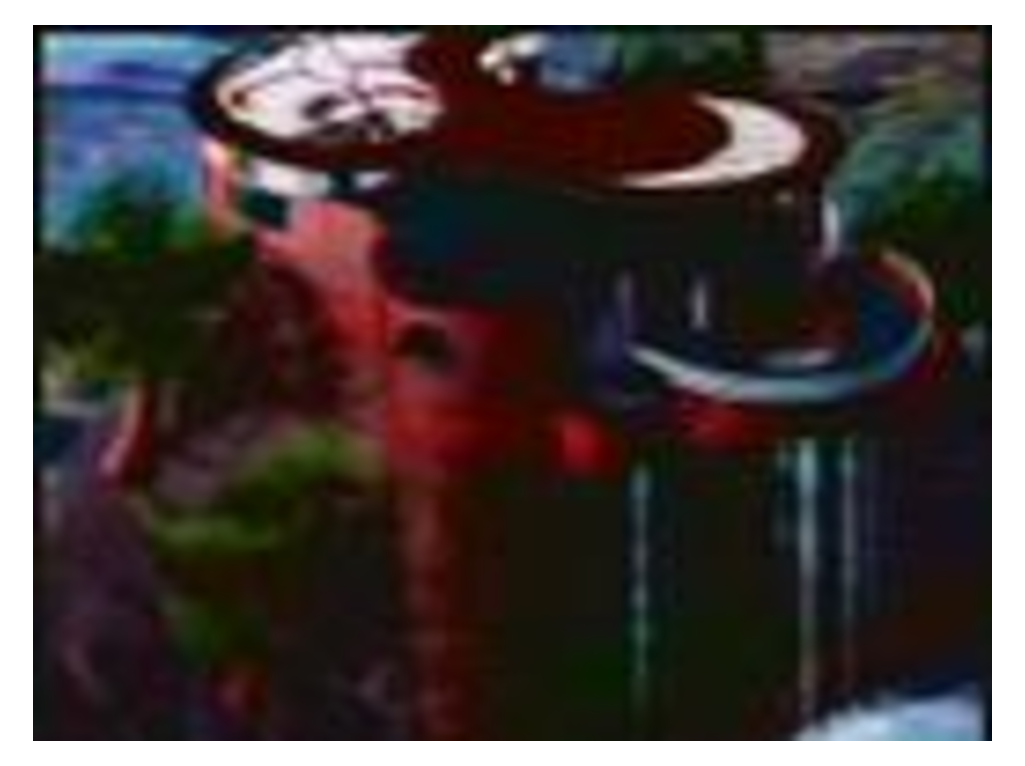 From The Mind’s Eye compilation #7


The Symbolics 3600 with the standard black-and-white monitor made a cameo appearance in the movie Real Genius. The company was also referenced in Michael Crichton’s novel Jurassic Park. 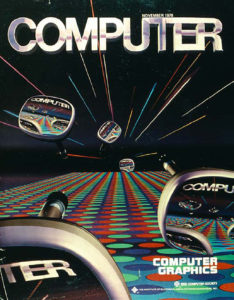 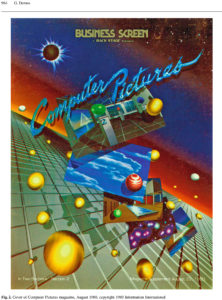 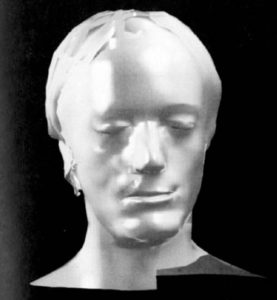 Digitized head of Peter Fonda, for the movie FutureWorld (1976) 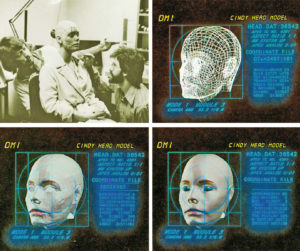 Cindy’s head from the movie Looker (1980). Actress Susan Dey is digitized from reference lines by Art Durinski and Larry Malone. 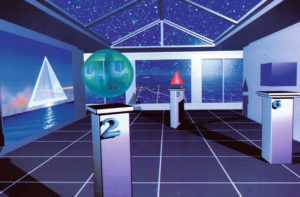 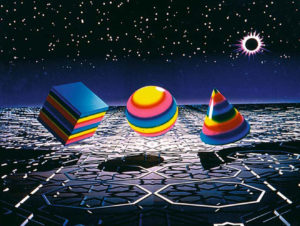 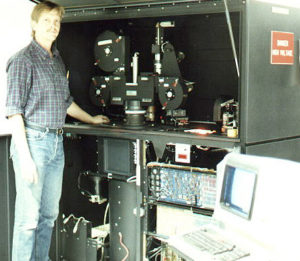 David Keller is shown here with the Digital Film Printer, developed by Gary Demos while at Triple-I. 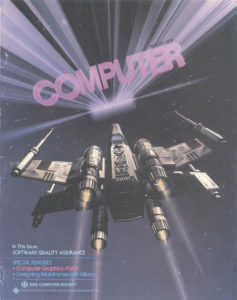 Cover of the August, 1979 IEEE Computer Magazine. Gary Demos produced this X-wing fighter image to convince George Lucas that CG could be used to make images for Star Wars.