Chapter 2: The emergence of graphics technology

Although the hardware developments of the 1950s were extremely important to the CG discipline, there were also many innovations with respect to software that have allowed us to move rapidly forward to where we are today. For example, in the early development of the ENIAC, it was determined that the value of a digital computer was that you could “program” it to accomplish tasks, and then reprogram it to do something completely different.

Grace Hopper was a programmer on the Harvard Mark I and Mark II projects, and was hired by the Eckert and Mauchly Computer Company in 1949 to program the commercial version of the ENIAC. She experimented with the concept of software reusability, and published a paper in 1952 which laid out the general concepts of language translation and compilers. General computer languages were thus enabled, which created an environment that encouraged a significantly larger universe of computer users and applications. Hopper became a Commodore in the U.S. Navy in 1983 (a rank that was converted to an Rear Admiral – Lower Half in 1985), and died in 1992.[1]
http://www.cs.yale.edu/homes/tap/Files/hopper-story.html

In 1954 John Backus of IBM proposed the FORTRAN programming language, which was built around the idea that you could express numerical formulae in the programming language and the compiler could convert it to the base level instructions of the machine on which it resided.

In 1960 John McCarthy of MIT published a landmark paper in the Communications of the ACM on recursive functions in programming, in which he introduced a new programming language called LISP (for “List Processing”). The language contained a handful of simple operators and a functional notation, all built around a central simple data structure called a list for both code and data. (LISP is the language used in the Symbolics graphics computer described in more detail in Section 6.3).

John G. Kemeny and Thomas E. Kurtz invented the language BASIC in 1964 for use at Dartmouth College. This language had a widespread influence on the development of the industry, as they made it freely available to everyone who wanted to learn how to program computers. Many other languages have evolved and been used by programmers in the intervening years.

Hopper, Grace. The Education of a Computer. Proceedings of the Association for Computing Machinery Conference (Pittsburgh) May 1952.

John McCarthy: Recursive Functions of Symbolic Expressions and Their Computation by Machine, Part I. Communications of the ACM 3(4): 184-195 (1960)    [Note: Part 2 was never published]

John Backus. The History of FORTRAN I, II, and III. History of Programming Languages, Association for Computing Machinery, 1981. 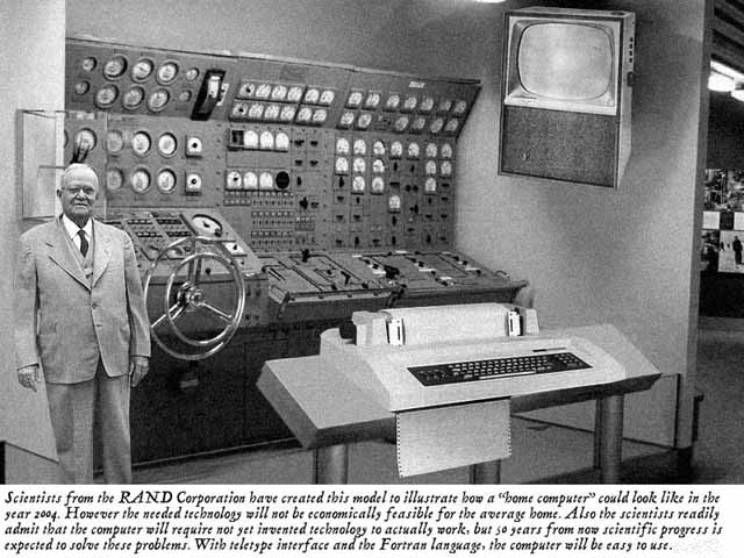 This photo from the 1954 Modern Mechanics magazine predicted what the home computer might look like 50 years from then. The caption reads “Scientists from the RAND Corporation have created this model to illustrate how a “home computer” could look like in the year 2004. However the needed technology will not be economically feasible for the average home. Also, the scientists readily admit that the computer will require not yet invented technology to actually work, but 50 years from now scientific progress is expected to solve these problems. With teletype interface and the Fortran language, the computer will be easy to use.”

The aforementioned “larger universe of computer users” that took advantage of Hopper’s early programming innovations included artists and designers, as well as mathematicians and computer engineers. Sometimes the difference between the diverse groups was blurry at best. In the early days of interacting with the new digital computer, often investigations into issues such as complex math formulas or ergonomic design resulted in visual images produced on the computer that have remained in our discipline as contributions to the field of art.

For example, Ben Laposky was a mathematician and artist from Iowa. In 1950, he created the first graphic images generated by an electronic (in his case, an analog) machine.  His electronic oscilloscope imagery was produced by manipulated electronic beams displayed across the fluorescent face of an oscilloscope’s cathode-ray tube and then recorded onto high-speed film. He called his oscillographic artworks ‘oscillons’ and ‘electronic abstractions’. The mathematical curves that were created by this method were similar to the Lissajous mathematical wave form. (Another artist working with the same approach was Herbert Franke from Germany. More about Franke can be read in Chapter 9 of this book.)

William Fetter was a graphic designer for Boeing Aircraft Co. and in 1960, was credited with coining the phrase “Computer Graphics” to describe what he was doing at Boeing at the time. (Fetter has said that the terms were actually given to him by Verne Hudson of the Wichita Division of Boeing.)

As Fetter stated in a 1978 interview, “There has been a long-standing need in certain computer graphics applications for human figure simulations, that as descriptions of the human body are both accurate and at the same time adaptable to different user environments.” His early work at Boeing was focused on the development of such ergonomic descriptions. One of the most memorable and iconic images of the early history of computer graphics was such a human figure, often referred to as the “Boeing Man”, but referred to by Fetter as the “First Man”.
(Source: http://courses.washington.edu/eatreun)

In 1970, Fetter left Seattle to work in Los Angeles, where he created one of the first in-perspective computer graphics TV commercials, a commercial for Norelco. He then moved to Carbondale, Illinois to become the Southern Illinois University Design Department Chairman, working with Buckminster Fuller. Fetter died in 2002.

John Whitney, Sr. was one of the earliest and most influential of the computer animation pioneers. He came at the problem from the background of film, working with his brother James Whitney[2] on a series of experimental films in the 1940s and 1950s.

His work in this area gave him the opportunity to collaborate with well known Hollywood filmmakers, including Saul Bass.

His earliest computer work used analog devices for controlling images and cameras. After the second world war, Whitney purchased surplus military equipment and modified it to be used in his art making. One such device was an analog mechanism used in military anti-aircraft controllers, the M-5 (and later the M-7). Whitney and his brother converted this device of war into an animation controller, and used it together with a mounted camera as an animation stand.

His son John Jr. said the following about his dad’s approach:

I don’t know how many simultaneous motions can be happening at once. There must be at least five ways just to operate the shutter. The input shaft on the camera rotates at 180 rpm, which results in a photographing speed of 8 frame/s. That cycle time is constant, not variable, but we never shoot that fast. It takes about nine seconds to make one revolution. During this nine-second cycle the tables are spinning on their own axes while simultaneously revolving around another axis while moving horizontally across the range of the camera, which may itself be turning or zooming up and down. During this operation we can have the shutter open all the time, or just at the end for a second or two, or at the beginning, or for half of the time if we want to do slit-scanning. [3]

Unlike the digital computer which requires the processing of mathematical equations as its input, Whitney’s analogue computer had to have its information ready before it was processed, meaning that a template had to be created. The “information” or image source was hi-con Kodalith film negatives. When manipulated by the cam machine in a precise orbital motion, with an added movement differential, the result was animation. His insight was to harness the cam and ball integrators (formerly used as dedicated equation solvers for the gun fuse timing) as a source of differential motion.

http://www.siggraph.org/artdesign/profile/whitney/home.html
Note: this site is no longer active, but has been archived in the Internet Archive. It is very slow loading.

After establishing his company Motion Graphics, Inc in 1960, he used his analog devices for the opening to the Hitchcock movie Vertigo in 1961. His company was focused on producing titles for film and television, and was also used in graphics for commercials. But Whitney was far more interested in the use of the technology as an art form, and began a series of collaborations in art making that lasted for years.

Many of these early collaborations revolved around the advancement of the vector graphics device as a viable tool for making art. Whitney received funding from IBM to take a look at the use of IBM equipment in the design of motion. He worked with IBM programmers in the development of a language for extending the computer to the control of graphics devices. This resulted in one of his most famous animations, Permutations, in 1968. Whitney went on to a residency at MIT in the Center for Advanced Visual Studies. Later he utilized the equipment of his son John, Jr., at his commercial company Information International Inc. (III) and created his Matrix III animation; he joined with artist/programmer Larry Cuba with funding from the National Endowment for the Arts and the Judith S. Thomas Foundation to produce what is arguably his second most famous work, Arabesque. In this film, Whitney demonstrated the concepts of “harmonic progression” through the vehicle of Islamic architecture.

Whitney joined the faculty at UCLA and supervised the work of a large number of animation students. Their collaboration, Digital Harmony (also the name of a book he wrote) was included in the 1984 SIGGRAPH electronic theatre and reflected one of his primary philosophies, that harmony not only exists in music, but in visual imagery and life in general. Whitney passed away in 1995.

Movie 2.5 – Interview with John Whitney before his death